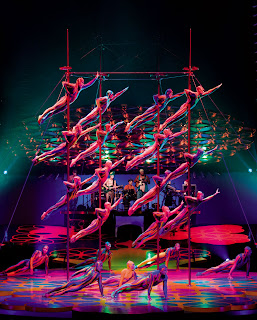 Saltimbanco has been around for 20 years. It was made in the days  before Cirque du Soliel was the billion dollar juggernaut that it is today. It was also the first Cirque show to tour Australia and the start of a continued series of visits that have offered Quidam, Alegria and Varekai.

Now Saltimbanco returns, but without the signature Grand Chapiteau that usually houses Cirque shows. This is a touring production that moves from arena to arena in nearly every state. In this format, the show can reach more parts of the country since it's cheaper to tour to established theatres than to nomadically erect a massive tent. 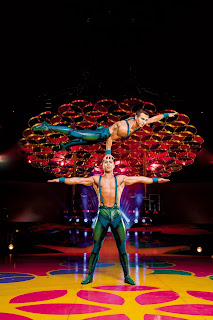 There's argument that the show loses its circus magic transplanted into venues that host tennis championships and rock concerts. Regardless, Cirque has a world-wide populist appeal that can't be denied. Love it or hate it - they have jam-packed shows running everywhere - from Las Vegas to Japan. Here in Melbourne (and more widely in Australia) where we are spoiled with top-class circus like Circus Oz, Acrobat, CIRCA, we know that, despite mass appeal, Cirque Du Soliel is not the only player on the field.

But they are probably the slickest player on the field and they do consistently showcase amazing acrobats, even when their artistry is questionable.  As they have moved into world-domination status, their budgets have grown - the shows have gotten busier and more indulgent, but bigger is not necessarily better. Some audiences have grown tired of all the slickness, all the smoke and mirrors. Even I have been advising people to save their money for Circus Oz's upcoming Steampowered show in June.

Between my recent underwhelming experiences with Cirque and knowing that Saltimbanco was going to be arena, rather than tent style, I didn't have high hopes for Saltimbanco. But I was wrong. I thoroughly enjoyed it simply because it seemed less busy than the other shows I had seen. Yes, it has exploding colours, over-wrought expression and a psychedelic set of immense proportion, but there is clear focus on the individual acts and the performers are given the time and space to excel. Given its excess, it seems strange to say that Saltimbanco feels simple, but, because of past experience it did.

Thank goodness for that.

Click here for my review of Saltimbanco in the Herald Sun on 27 May 2011.
Posted by dancereviewsmelbourne at 10:46 AM