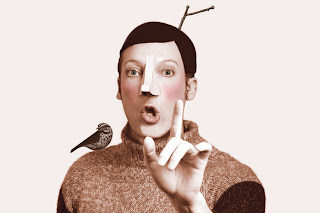 Even though I am primarily a dance and circus critic, I occasionally get to cover children's shows. This production from Windmill Theatre and the South Australian Theatre Company is a highly elaborate, sophisticatedly designed affair. It's probably geared more for older kids than younger ones, but having said that, my four-year old son sat quietly transfixed through the whole production (over two hours!) I do think most of it went over his head, but that didn't seem to matter. I had shown him clips of Disney's Pinocchio movie beforehand, but visually there weren't many similarities between the two productions for him to take in.

Pinocchio has lots going for it - it's slicky executed and filled with popular culture references as well as a couple of good songs. Unfortunately, it suffers from being just too long and having too many different story lines. With another draft and an outside dramaturg to tighten it right up, it would be better bang for buck.

Still, it has excellent performances all around and creates that magical feeling of being transported to a totally different and exciting place.

Click here for my review of Pinocchio in the Herald Sun on 11 September 2012.
Posted by dancereviewsmelbourne at 3:35 PM